The spanish electronic Administration improvement 4.7 points your score, standing in front of other major european countries like germany, france, united kingdom and italy.

The Contents of the economy and Digital Society (DESI) 2019, the european Union made public today, highlights the fact that in Spain the public services remain the digital dimension with better results. The spanish electronic Administration is ranked number 4 of the eu countries, with best score in 2018. All indicators are significantly above the european average and digital in public services are ahead of the rest of large countries, such as France, germany, italy and united Kingdom.

Spain improves their overall score at 2.9 points and is situated 3.6 points above the average for the European Union, placing in the overall ranking, at 11 28 states members of the eu. As regards electronic administration, we go up to 4.7 points the previous report

Is the improvement in the indicators for use: the percentage of internet users is the first time in the european average and the percentage of users of Electronic administration increases from 67 per cent to 76 per cent

Spain also holds second place in open and there is a high level of on-line interaction between public authorities and citizens. The 76 per cent of internet users spaniards are actively involved with the services of Electronic administration.

This year includes new indicators related to the e-health as the exchange of information between professionals and an electronic prescription, in which spain also receives a score above the european average.

stresses the investment in open database and the efforts made on the principle of “ digital by default ”, which indicates that most public services are available in digital form. However, there is still room for improvement for various indicators, in particular, on the use of Electronic administration or precumplimentados forms. The SGAD considers that the increased use of digital services is essential, because while Spain gets good results in the completeness of digital services, is the use of the same which is in the savings and reduce administrative burdens. It is therefore submitted that the use should be the main parameter of follow-up.

The Índice of economy and Digital Society (DESI) meets five years in 2019 and sums up five digital performance indicators of europe and to monitor the evolution of the states members of the european union in competitiveness. These five indicators are: connectivity, human capital, use of internet, integration of digital technology and public services.

at an aggregate level, to analyse all indicators, Spain

ranked number 11 28 states members of the eu, too, ahead of countries such as Germany, france or italy.

It should be noted that the european commission has introduced methodological changes, applied retroactively, put Spain in the position 11 in 2018, by which Spain maintains its position on last year. It must be noted, however, that the overall score has increased owing to higher performance in the dimensions of Public Services and Digital Connectivity. 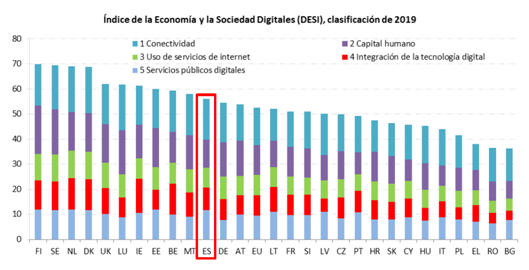 Among all dimensions, stresses the position of spain in the area of e-administration, in which our country remains fourthly. If one takes into account the new methodology used by the european commission, spain, in addition, improvement in two ranking positions in public services.

It should be noted that spain has the best located in connection with the rest of europe of similar size and complexity. Over the previous year, spain is improving its situation with regard to Denmark but is overtaken by The Netherlands, remaining in this way at the same place. 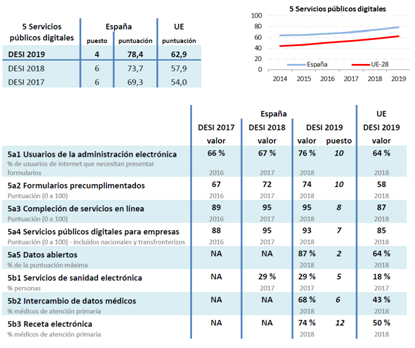 The report DESI also stresses the improvement in connectivity dimension where spain is the position of 10 to the position 9 and stresses the coverage of fast networks and split-second, indicating that 88% of citizens have access to the latter.

With regard to the use of internet services, Spain is situated in the european average and above the same in integration of digital technology. However, the report DESI believes that there are significant differences in the connectivity between populations and large rural areas and that spain must become better at training dimension digital, aligned with the message recommendations

submitted by the european commission on 5 june.

These results are included in the efforts being made by the spanish public administrations in the development of E-government in recent years.

At present, all public administrations are currently working intensively on the implementation of laws 39/2015 and 40/2015, on various issues such as electronic notifications for companies or additional provisions that come into force in 2020.