The Open Data Maturity Report in Europe is produced annually by the European Data Portal since 2015. This report assesses the level of maturity in open data of the EU Member States, together with the countries belonging to the EFTA (Iceland, Liechtenstein, Norway and Switzerland), helping them to identify possible areas for improvement and facilitating their comparison with other countries.

In the 2020 edition, Spain holds second place in the global ranking, placing it in the group of Trend-Setters.

Of the four dimensions analysed, Spain stands out especially in the "Impact" dimension, where it achieves the highest score.

The ‘Political Impact’ indicator of this dimension highlights the publication of the "Public administrations and the reuse of public information" report in 2020, which measures the impact of open data on the public administrations; the “Energy Datahub” of Castile and Leon Regional Government, a dashboard showing the energy consumption of the public centres of this autonomous administration; and the interactive online map of crime in Catalonia with data from 2011 to date. 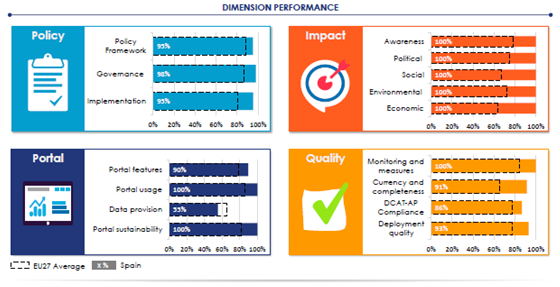 Regarding the ‘Portal usage’ indicator of the ‘Portal’ dimension, the use of a set of tools for web analysis, social media and social impact analysis and web positioning, to analyse different aspect of the portal’s usage, stands out in Spain. In the same dimension, in ‘Portal Sustainability’ indicator, the creation of a user-friendly dashboard that provides a global vision of the figures of the portal through interactive graphics is highlighted as an interesting practice of Spain.